A cerebral infarction is an area of necrotic tissue in the brain resulting from a blockage or narrowing in the arteries supplying blood and oxygen to the brain. The restricted oxygen due to the restricted blood supply causes an ischemic stroke that can result in an infarction if the blood flow is not restored within a relatively short period of time. The blockage can be due to a thrombus, an embolus or an atheromatous stenosis of one or more arteries.[1] Which arteries are problematic will determine which areas of the brain are affected (infarcted). These varying infarcts will produce different symptoms and outcomes. About one third will prove fatal.

There are various classification systems[2] for a cerebral infarction, some of which are described below.

Symptoms of cerebral infarction are determined by the parts of the brain affected. If the infarct is located in primary motor cortex, contralateral hemiparesis is said to occur. With brainstem localization, brainstem syndromes are typical: Wallenberg's syndrome, Weber's syndrome, Millard–Gubler syndrome, Benedikt syndrome or others.

Infarctions will result in weakness and loss of sensation on the opposite side of the body. Physical examination of the head area will reveal abnormal pupil dilation, light reaction and lack of eye movement on opposite side. If the infarction occurs on the left side brain, speech will be slurred. Reflexes may be aggravated as well.

Major risk factors for cerebral infarction are generally the same as for atherosclerosis: high blood pressure, Diabetes mellitus, tobacco smoking, obesity, and dyslipidemia.[6] The American Heart Association/American Stroke Association (AHA/ASA) recommends controlling these risk factors in order to prevent stroke.[7] The AHA/ASA guidelines also provide information on how to prevent stroke if someone has more specific concerns, such as Sickle-cell disease or pregnancy. It is also possible to calculate the risk of stroke in the next decade based on information gathered through the Framingham Heart Study.[8] 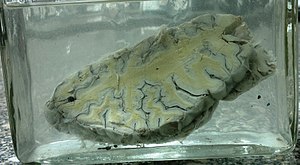 Hemodynamic changes seen using an IOS camera specific for hemoglobin volume changes where we see the occlusion of a Middle Cerebral Artery (MCA) and how Spreading Depolarizations appear and spread over the cortex.[9]

Whether a cerebral infarction is thrombotic or embolic based, its pathophysiology, or the observed conditions and underlying mechanisms of the disease. In thrombotic ischemic stroke, a thrombus forms and blocks blood flow.[10] A thrombus forms when the endothelium is activated by a variety of signals to result in platelet aggregation in the artery. This clump of platelets interacts with fibrin to form a platelet plug.[11] This platelet plug grows into a thrombus, resulting in a stenotic artery. Thrombotic ischemia can occur in large or small blood vessels. In large vessels, the most common causes of thrombi are atherosclerosis and vasoconstriction. In small vessels, the most common cause is lipohyalinosis.[12] Lipohyalinosis is when high blood pressure and aging causes a build-up of fatty hyaline matter in blood vessels. Atheroma formation can also cause small vessel thrombotic ischemic stroke.[13] Occlusion of blood flow generates a depolarization of neurons that generate a wave called spreading depolarization,[14] that moves from the affected core to the penumbra and healthy brain producing further depolarization, neuronal dead and neurologic symptoms.[15]

An embolic stroke refers to the blockage of an artery by an embolus, a traveling particle or debris in the arterial bloodstream originating elsewhere. An embolus is most frequently a thrombus, but it can also be a number of other substances including fat (e.g. from bone marrow in a broken bone), air, cancer cells or clumps of bacteria (usually from infectious endocarditis). The embolus may be of cardiac origin due to Atrial fibrillation, Patent foramen ovale or from atherosclerotic plaque of another (or the same) large artery. Cerebral artery gas embolism (e.g. during ascent from a SCUBA dive) is also a possible cause of infarction (Levvett & Millar, 2008)

Computed tomography (CT) and MRI scanning will show damaged area in the brain, showing that the symptoms were not caused by a tumor, subdural hematoma or other brain disorder. The blockage will also appear on the angiogram.

In last decade, similar to myocardial infarction treatment, thrombolytic drugs were introduced in the therapy of cerebral infarction. The use of intravenous rtPA therapy can be advocated in patients who arrive to stroke unit and can be fully evaluated within 3 h of the onset.

If cerebral infarction is caused by a thrombus occluding blood flow to an artery supplying the brain, definitive therapy is aimed at removing the blockage by breaking the clot down (thrombolysis), or by removing it mechanically (thrombectomy). The more rapidly blood flow is restored to the brain, the fewer brain cells die.[16] In increasing numbers of primary stroke centers, pharmacologic thrombolysis with the drug tissue plasminogen activator (tPA), is used to dissolve the clot and unblock the artery. Another intervention for acute cerebral ischaemia is removal of the offending thrombus directly. This is accomplished by inserting a catheter into the femoral artery, directing it into the cerebral circulation, and deploying a corkscrew-like device to ensnare the clot, which is then withdrawn from the body. Mechanical embolectomy devices have been demonstrated effective at restoring blood flow in patients who were unable to receive thrombolytic drugs or for whom the drugs were ineffective,[17][18][19][20] though no differences have been found between newer and older versions of the devices.[21] The devices have only been tested on patients treated with mechanical clot embolectomy within eight hours of the onset of symptoms.

Angioplasty and stenting have begun to be looked at as possible viable options in treatment of acute cerebral ischaemia. In a systematic review of six uncontrolled, single-center trials, involving a total of 300 patients, of intra-cranial stenting in symptomatic intracranial arterial stenosis, the rate of technical success (reduction to stenosis of <50%) ranged from 90-98%, and the rate of major peri-procedural complications ranged from 4-10%. The rates of restenosis and/or stroke following the treatment were also favorable.[22] This data suggests that a large, randomized controlled trial is needed to more completely evaluate the possible therapeutic advantage of this treatment.

If studies show carotid stenosis, and the patient has residual function in the affected side, carotid endarterectomy (surgical removal of the stenosis) may decrease the risk of recurrence if performed rapidly after cerebral infarction. Carotid endarterectomy is also indicated to decrease the risk of cerebral infarction for symptomatic carotid stenosis (>70 to 80% reduction in diameter).[23]

In tissue losses that are not immediately fatal, the best course of action is to make every effort to restore impairments through physical therapy, cognitive therapy, occupational therapy, speech therapy and exercise.

Permissive hypertension - allowing for higher than normal blood pressures in the acute phase of cerebral infarction - can be used to encourage perfusion to the penumbra.[24]