!PAUS3, or THEE PAUSE, (born July 27, 1981) is an international platinum selling musician and artist, who began his career in his early teens in the former Soviet Bloc nations of Ukraine, Romania and Bulgaria.

THEE PAUSE is originally from Philadelphia, Pennsylvania and currently based in the New York City area. He has been previously selected by MTV & 495 Productions with other DJs to perform internationally for thousands.[1] Having been selected to perform with and remix multiple platinum selling artists,[2] he has been featured as a guest curator for Trance Mix.[3] He has been featured, interviewed or reviewed by Spin (France), Scotch & Murder Monthly, More Than Disco, Hot Biscuits, The Atlantic Monthly, Trip Hop Daily, Creme de le Creme, reverb, Music Under Fire, and Fahrenheit, and has multiple top-charting tracks and remixes on The Hype Machine and Beatport.[4][5] THEE PAUSE was selected in February 2012 as a featured DJ for W Hotels Worldwide and a commissioned mix was made available exclusively on W Hotels Worldwide by Starwood Hotels and Resorts iPhone application.[6] 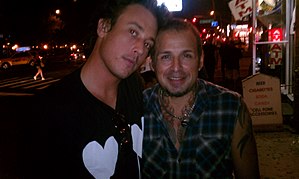 In March 2013, THEE PAUSE joined forces with Scott Putesky, former lead guitarist and co-founder of the band Marilyn Manson, to form "The Daisy Kids". The Daisy Kids was an American hard rock group consisting of former Marilyn Manson guitarist Daisy Berkowitz and producer, multi-instrumentalist and bass player THEE PAUSE. Guest vocals on the Mr Conrad Samsung EP were provided by Justin Symbol of Nursing Home fame[2]. Numerous rough demos were recorded, including a yet to circulate four-song CD entitled The Samsung Sessions. That four-song CD/demo was shelved due to legal issues regarding the use of uncleared samples, and only one track from those recording sessions has surfaced to date.

Tracks known to have been recorded include:

With legal issues resolved, November 20, 2015, saw the release of the Mr Conrad Samsung EP, which had been delayed since 2013 and is the final released recording featuring guitarist and vocalist Scott Putesky prior to his passing in 2017.[11]

After numerous delays due to internal health problems plaguing both band members[5] Daisy Berkowitz and THEE PAUSE, the Mr Conrad Samsung EP was released digitally on September 20, 2015, via Organic Intelligence Records internationally. Vocal duties were split on this EP between Daisy Berkowitz, THEE PAUSE and Justin Symbol. No tour was planned at the time as the band members focused on their health, and Justin Symbol continued to pursue his various solo and side projects.

Andy Stott is a Manchester-based producer of dub and techno music who has released three albums with the Modern Love label. THEE PAUSE's remix of Andy Stott's "Numb" charted on Pitchfork's Top 200 Tracks of the Decade so Far.

stic.man of DeadPrez and THEE PAUSE relax post-show and smile for fans.