"As the Old Sing, So Pipe the Young" (Jan Steen)

Soo voer gesongen, soo na gepepen is a c.1668–1670 oil-on-canvas painting (H 133.7 cm × W 162.5 cm) by Dutch artist Jan Steen, that is currently featured in the Mauritshuis museum in The Hague. The painting is a celebratory holiday scene that depicts three generations of a Dutch family, and serves as an allegory about parental examples, vice, and influence. This subject has been painted thirteen times by Jan Steen and has also been known as The Cat Family, or Jan Steen's Family. Of the many renditions, the Mauritshuis version is considered to be the exemplar of the series. 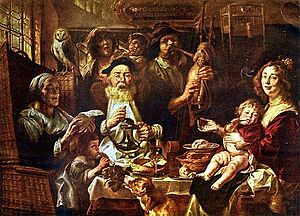 Jacob Jordaens, As the Old Sing, So Pipe the Young, 1640, oil on canvas

The holiday scene depicts the proverb of "As the Old Sing, So Pipe the Young" and deliberately alludes to the fact the elders in a family have certain traits that recur in subsequent generations. Inherited traits were viewed by the Dutch people at the time as being a two-sided coin, where a child would inherit genetic traits from their parents, but would also learn to emulate the behaviors that they witnessed.[1] This is also referred to as nature versus nurture.[2] The depiction of three generations of family members in this scene is a direct allusion to this idea,[1] with the parents providing seemingly poor examples to their children by drinking alcoholic beverages and encouraging the children to smoke. The title can also be interpreted as "Like father, like son." [3] Such proverbs were popular in Dutch painting and are represented by many paintings by Steen and other artists. This painting has been linked to Steen's work titled The Twelfth Night Feast, the two paintings forming a diptych of the same theme.[1] The theme is thought to be inspired by Jacob Jordaens, a contemporary Flemish painter. Jordaen's version preceded Steen's, having been painted in the year 1683[citation needed] . Like Jordaens, Steen paired proverbs with merry company paintings, which was popular and served a didactic purpose for the viewer.

As a genre scene, the painting contains many iconographic elements that are open to the viewer's interpretation and ideas that relate to Dutch popular culture of the time. The painting consists of a gathering of family members (parents, children, grandparents) around a table that is draped with a carpet typical of Dutch scenes.[2] Though the subject has been painted by Steen an estimated thirteen times, each one was depicted in a household setting as the theme for child rearing and parental interaction.[1] Like most of Steen's paintings As the Old Sing... is of the merry company genre and depicts family life as a part of popular culture during the 17th century. Paintings of this particular period are commonly festive scenes in Dutch domestic settings.[4] The large canvas displays Steen's mastery of painting light on surfaces, as can be seen in the treatment of light from the window reflected onto the surfaces of the models' clothing and furniture accents. The facial features of the subjects are painted in a realistic style with attention to light and shadow.[3] The overall scene of the merry atmosphere is thought to be open and inviting with the figures situated in an open arrangement, with warm colors of orange, pink, purple, and brown; while casually enjoying themselves. The old lady in the foreground, thought to be Steen's mother, is holding a sheet of music that is open and can be easily read by the viewer.[1] Steen is distinguished as a skilled comic painter and for depicting himself in his paintings, as well as members of his own family.[2] Here he has depicted himself as the father seen in the right side of the canvas who is teaching his younger son to smoke a pipe. Such a painting was thought by the artist to have universal appeal and understanding, but of course, it would have had more resonance with a well-read person familiar with the proverbs, symbolism, and culture of the seventeenth century. Ironically, Steen's knowledge of such readings and traditions is considered to be rather sophisticated.[3]

The figures in the scene are Steen at the right wearing a black hat and teaching his younger son to smoke, his older son playing a bagpipe, a young girl at the far right edge of the canvas, Steen's mother in the right-side foreground, and an unknown female family member holding a baby.[2] There is also a male servant at the rear center who is pouring an alcoholic drink into the glass of Steen's wife, who is pictured at the left of the canvas wearing a green coat and lavender skirt with her glass outstretched. There is a dog in the foreground. At the center of the table is an oyster which has been a popular symbol in Dutch genre painting. The oyster has been known as a symbol of Aphrodite, love, fertility, and sexual pleasure.[4] The symbol is befitting of such as scene as it is associated with foods served at a feast of the gods.[4] The oyster was commonly depicted in Dutch genre paintings up until the year 1635 when it became less common.[4] After the year 1660 the symbol again became a common theme as it is here in Steen's 1668–1670 painting. In the painting the woman in the lavender skirt sitting at the left is a depiction of Steen's wife. She and Steen both wear a pink ribbon, she in her hair, and he on his hat. This ribbon is a unifying element between the two and represents their being cut from the same spool of ribbon.[1] The parrot situated at the top left of the painting is a symbol of mimicry.[2] To the left of the parrot is a pair of birds in a small birdcage which symbolizes two parents in a small abode.[1] The pipe in the scene may have multiple meanings referring to a clay smoking pipe, the act of singing, or to a drinking vessel.[3] According to the Dutch, the bagpipe was not an esteemed instrument as it was thought to be lowly and obnoxious.[2] Such a symbol here represents bawdiness and low class, which is being encouraged by the parents.[2] The young man playing the bagpipe is an older son of Steen. The laughing face of Jan Steen is commonly depicted by the artist in his paintings and is considered to be his iconography[1][3] while laughter is also thought to be a symbol of foolishness and or fault.[1] A reader might interpret the many laughing faces as gained wisdom, human fault, or lessons learned. Steen's iconographic grin has become somewhat of a folk character to museum patrons who delight in seeing his face in paintings.[3]

Steen has been detailed by historians as being from a middle-class, Catholic family of Leiden, who was also preoccupied with drinking and imprudent of his finances.[1][3] Historical accounts state that Steen's father owned a brewery but also suggest that the brewery business became less profitable due to economic demands and competition. As a result, Steen was encouraged by his parents to pursue a career in painting, which was a respected profession of the time.[1] From his experience as a painter Steen endured constant fluctuations of financial difficulty.[1] As a painter he often depicted himself within his comical scenes to show himself immersed in the culture he depicted and is also as an allusion to the idea that art imitates life.[3] Steen was a resident of The Hague where he married Margariet or Grietje, and also became a member of The Hague Guild.[1] As a member of the guild Steen is thought to have pursued comic painting as the path to a chosen specialization.[1]

Steen is considered to have been a fixture in Leiden, with most of his commissions coming from familial connections and recommendations.[1] Historical records indicate patrons numbering above one hundred, with some owners directly inheriting the works.[1] Patrons tended to be members of respectable professions including doctors, pharmacists, lawyers, manufacturers, and an innkeeper.[1] The presence of Steen's likeness in his paintings has been a dealbreaker for some patrons[3] and it has also functioned as a signature.[3]