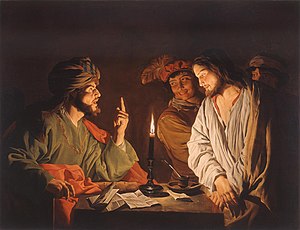 Christ Before Caiaphas, by Matthias Stom.

Joseph ben Caiaphas (c. 14 BC – c. 46 AD[1]), known simply as Caiaphas (Hebrew: יוֹסֵף בַּר קַיָּפָא‎ Yōsēf bar Qayyāfāʾ; Greek: Καϊάφας) in the New Testament, was the Jewish high priest who, according to the gospels, organized a plot to kill Jesus. He famously presided over the Sanhedrin trial of Jesus.[2] The primary sources for Caiaphas' life are the New Testament and the writings of Josephus. Outside of his interactions with Jesus, little else is known about his tenure as high priest. 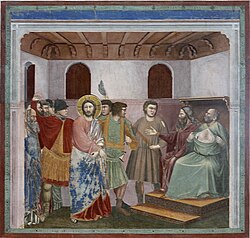 Annas, father-in-law of Caiaphas (John 18:13), had been high-priest from AD 6 to 15, and continued to exercise a significant influence over Jewish affairs.[4] Annas and Caiaphas may have sympathized with the Sadducees, a religious movement in Judaea that found most of its members among the wealthy Jewish elite. The comparatively long eighteen-year tenure of Caiaphas suggests he had a good working relationship with the Roman authorities.[5]

In the Gospel of John (John 11), the high priests call a gathering of the Sanhedrin in reaction to the raising of Lazarus.[6] In the parable related in the Gospel of Luke (Luke 16:28-30), the likely reaction of the "five brothers" to the possibility of the return of the beggar Lazarus has given rise to the suggestion by Claude-Joseph Drioux and others that the "rich man" is itself an attack on Caiaphas, his father-in-law, and his five brothers-in-law.[7]

Caiaphas considers, with "the Chief Priests and Pharisees", what to do about Jesus, whose influence was spreading. They worry that if they "let him go on like this, everyone will believe in him, and the Romans will come and destroy both our holy place and our nation."

In the Gospel of John (John 18), Jesus is brought before Annas, whose palace was closer.[8] Annas questioned him regarding his disciples and teaching, and then sent him on to Caiaphas. Caiaphas makes a political calculation, suggesting that it would be better for "one man" (Jesus) to die than for "the whole nation" to be destroyed. Similar ideas can be found in Rabbinical discussion in Talmud and Midrash.[9]

Afterward, Jesus is taken to Pontius Pilate, the Roman governor of Judea. Pilate tells the priests to judge Jesus themselves, to which they respond they lack authority to do so. Pilate questions Jesus, after which he states, "I find no basis for a charge against him." Pilate then offers the gathered crowd the choice of one prisoner to release—said to be a Passover tradition—and they choose a criminal named Barabbas instead of Jesus.

In the Gospel of Matthew (Matthew 26:56-67), Caiaphas and others of the Sanhedrin are depicted interrogating Jesus. They are looking for false evidence with which to frame Jesus, but are unable to find any. Jesus remains silent throughout the proceedings until Caiaphas demands that Jesus say whether he is the Christ. Jesus replies "I am: and you will see the Son of Man seated at the right hand of power, and coming on the clouds of heaven." (Mark 14:62) Caiaphas and the other men charge him with blasphemy and sentence him to corporal punishment for his crime.

Caiaphas was the son-in-law of Annas by marriage to his daughter and ruled longer than any high priest in New Testament times. For Jewish leaders of the time, there were serious concerns about Roman rule and an insurgent Zealot movement to eject the Romans from Israel. The Romans would not perform execution over violations of Halakha, and therefore the charge of blasphemy would not have mattered to Pilate. Caiaphas' legal position, therefore, was to establish that Jesus was guilty not only of blasphemy, but also of proclaiming himself to be the Messiah, which was understood as the return of the Davidic kingship. This would have been an act of sedition and prompted Roman execution.[citation needed]

Acts: Peter and John refuse to be silenced

Later, in Acts 4, Peter and John went before Annas and Caiaphas after having healed a crippled man. Caiaphas and Annas questioned the apostles' authority to perform such a miracle. When Peter, full of the Holy Spirit, answered that Jesus of Nazareth was the source of their power, Caiaphas and the other priests realized that the two men had no formal education yet spoke eloquently about the man they called their saviour. Caiaphas sent the apostles away, and agreed with the other priests that the word of the miracle had already been spread too much to attempt to refute, and instead the priests would need to warn the apostles not to spread the name of Jesus. However, when they gave Peter and John this command, the two refused, saying "Judge for yourselves whether it is right in God's sight to obey you rather than God. For we cannot help speaking about what we have seen and heard."[10]

The 1st-century Jewish historian Josephus is considered the most reliable extra-biblical literary source for Caiaphas.[11] His works contain information on the dates for Caiaphas' tenure of the high priesthood, along with reports on other high priests, and also help to establish a coherent description of the responsibilities of the high-priestly office. Josephus (Antiquitates Judaicae 18.33–35) relates that Caiaphas became a high priest during a turbulent period. He also states that the proconsul Lucius Vitellius the Elder deposed Caiaphas (Antiquitates Judaicae 18.95–97).[12] Josephus' account is based on an older source, in which incumbents of the high priesthood were listed chronologically.[13]

According to Josephus, Caiaphas was appointed in AD 18 by the Roman prefect Valerius Gratus [2] who preceded Pontius Pilate.

According to John, Caiaphas was the son-in-law of the high priest Annas, who is widely identified with Ananus the son of Seth, mentioned by Josephus.[14] Annas was deposed after the death of Augustus, but had five sons who served as high priest after him. The terms of Annas, Caiaphas, and the five brothers are:

According to Helen Bond, there may be some references to Caiaphas in the rabbinic literature.[15]

Ossuary with the name קפא carved into its side, found in Jerusalem in 1990. Israel Museum, Jerusalem
Main articles: Caiaphas ossuary and Miriam ossuary

In November 1990, workers found an ornate limestone ossuary while paving a road in the Peace Forest south of the Abu Tor neighborhood of Jerusalem.[2][16] This ossuary appeared authentic and contained human remains. An Aramaic inscription on the side was thought to read "Joseph son of Caiaphas" and on the basis of this the bones of an elderly man were considered to belong to the High Priest Caiaphas.[2][17] Since the original discovery this identification has been challenged by some scholars on various grounds, including the spelling of the inscription, the lack of any mention of Caiaphas' status as High Priest, the plainness of the tomb (although the ossuary itself is as ornate as might be expected from someone of his rank and family), and other reasons.[17][18]

In June 2011, archaeologists from Bar-Ilan University and Tel Aviv University announced the recovery of a stolen ossuary, plundered from a tomb in the Valley of Elah. The Israel Antiquities Authority declared it authentic, and expressed regret that it could not be studied in situ.[19] It is inscribed with the text: "Miriam, daughter of Yeshua, son of Caiaphas, Priest of Ma’aziah from Beth ‘Imri". Based on it, Caiaphas can be assigned to the priestly division of Ma’aziah, instituted by king David.[20]

In Inferno, Dante Alighieri places Caiaphas in the sixth realm of the eighth circle of Hell, where hypocrites are punished in the afterlife. His punishment is to be eternally crucified across the hypocrites' path, who eternally step on him.

Caiaphas is mentioned throughout the works of William Blake as a byword for a traitor or Pharisee.

Caiaphas and his ossuary are the subjects of Bob Hostetler's novel, The Bone Box (2008).[21]

Caiaphas is mentioned in the 19th verse of The Ballad of Reading Gaol by Oscar Wilde:

He does not stare upon the air


Through a little roof of glass;
He does not pray with lips of clay
For his agony to pass,
Nor feel upon his shuddering cheek


The kiss of Caiaphas

He is also shown as influencing Pontius Pilate in passing the death sentence against Jesus in The Master and Margarita by Mikhail Bulgakov.

Christ before Caiaphas, c.1490, is one of only a handful of works attributed to Antonio della Corna, who was active primarily in his native Lombardy in northern Italy.

Actors who have portrayed Caiaphas include Rudolph Schildkraut in Cecil B. DeMille's film King of Kings (1927), Guy Rolfe in Nicholas Ray's film King of Kings (1961), Rodolfo Wilcock in Pier Paolo Pasolini's film The Gospel According to St. Matthew (1964), Martin Landau in George Stevens' film The Greatest Story Ever Told (1965), Bob Bingham in Norman Jewison's film Jesus Christ Superstar (1973), Anthony Quinn in Franco Zeffirelli's television miniseries Jesus of Nazareth (1977), Christian Kohlund in Jesus (1999), David Schofield in The Miracle Maker (2000), Mattia Sbragia in Mel Gibson's film The Passion of the Christ (2004), Bernard Hepton in Son of Man, Adrian Schiller in the TV miniseries The Bible (2013) and the film Son of God (2014), both by same production team, Rufus Sewell in Killing Jesus (2015) and Richard Coyle in A.D. The Bible Continues, an NBC miniseries by Mark Burnett and Roma Downey.