The peso is the currency of Chile. The current peso has circulated since 1975, with a previous version circulating between 1817 and 1960. Its symbol is defined as a letter S with either one or two vertical bars superimposed prefixing the amount,[1] $ or

; the single-bar symbol, available in most modern text systems, is almost always used. Both of these symbols are used by many currencies, most notably the United States dollar, and may be ambiguous without clarification, such as CLP$ or US$. The ISO 4217 code for the present peso is CLP. It is officially subdivided into 100 centavos, although there are no current centavo-denominated coins. The exchange rate was around CLP$730 to 1 United States dollar as of March 2021. 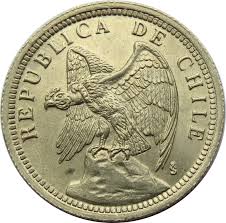 The first Chilean peso was introduced in 1817, at a value of 8 Spanish colonial reales. Until 1851, the peso was subdivided into 8 reales, with the escudo worth 2 pesos. In 1835, copper coins denominated in centavos were introduced, but it was not until 1851 that the real and escudo denominations ceased to be issued and further issues in centavos and décimos (worth 10 centavos) commenced. Also in 1851, the peso was set equal 5 French francs on the sild, 22.5 grams pure silver. However, gold coins were issued to a different standard to that of France, with 1 peso = 1.37 grams gold (5 francs equalled 1.45 grams gold). In 1885, a gold standard was adopted, pegging the peso to the British pound sterling at a rate of ​13 1⁄3 pesos = 1 pound (1 peso = 1 shilling 6 pence). This was reduced in 1926 to 40 pesos = 1 pound (1 peso = 6 pence). From 1925, coins and banknotes were issued denominated in cóndores, worth 10 pesos. The gold standard was suspended in 1932 and the peso's value fell further. The escudo replaced the peso on 1 January 1960 at a rate 1 escudo = 1000 pesos.

In 1960, aluminium 1 centésimo and aluminium-bronze 2, 5 and 10 centésimo coins were introduced, followed by aluminium ​1⁄2 centésimo in 1962. In 1963 the ​1⁄2 and 1 centésimo coins where withdrawn. In 1970, a new coinage was introduced, consisting of aluminium-bronze 10, 20 and 50 centésimos and cupro-nickel 1, 2 and 5 escudos, the 2 and 5 centésimo where not included in the new coinage and although they remained legal tender no new coins would be made. Shortly after it was introduced the 2 escudo coin was discontinued in 1971. In 1972 the coinage introduced in 1970 was discontinued, with a new aluminium 5 escudos produced in 1972 and shortly afte in 1974 and 1975, aluminium 10 escudos and nickel-brass 50 and 100 escudos were issued.

In 1975, coins were introduced in denominations of 1, 5, 10, and 50 Centavos and 1 peso. The 1-, 5-, and 10-centavo coins were very similar to the 10-, 50-, and 100-escudo coins they replaced. Since 1983, inflation has left the centavo coins obsolete. Five- and 10-peso coins were introduced in 1976, followed by 50- and 100-peso coins in 1981 and by a bi-metallic 500-peso coin in 2000. Coins currently in circulation are in denominations of 1, 5, 10, 50, 100, and 500 pesos; however, as of 2016[update] the value of the peso has depreciated enough that most retailers and others tend to use prices that are multiples of 10 pesos, ignoring smaller amounts. The 1 peso coin is rare. On 26 October 2017 the Mint stopped producing 1 and 5 peso coins, and started accepting those coins directly at the mint to exchange for larger denomination. On 1 November 2017 commercial entities began rounding off amounts for payment in cash, rounding down for amounts ending in 1 through 5 pesos, rounding up for amounts ending in 6 through 9 pesos. Electronic transactions and cheques are not affected. This change has affected various charities which had programs to accept donations at the cash register.[3]

Right after the military dictatorship in Chile (1973–1990) ended, the obverse designs of the 5- and 10-peso coins were changed. Those coins had borne the image of a winged female figure wearing a classical robe and portrayed as if she had just broken a chain binding her two hands together (a length of chain could be seen hanging from each of her wrists); beside her appear the date of the coup d'état Roman numerals and the word LIBERTAD (Spanish for "liberty"). After the return of democracy, a design with the portrait of Bernardo O'Higgins was adopted.

In 2001, a newly redesigned 100-peso coin bearing the image of a Mapuche woman began to circulate. In February, 2010, it was discovered that on the 2008 series of the 50-peso coins the country name "CHILE" had been misspelled as "CHIIE". The national mint said that it did not plan to recall the coins. Worth about 9 cents (US) each at the time, the faulty coins became collectors' items.[4]

Since September 2004, the 2000-peso note has been issued only as a polymer banknote; the 5000-peso note began emission in polymer in September 2009; and the 1000-peso note was switched to polymer in May, 2011. This was the first time in Chilean history that a new family of banknotes was put into circulation for other cause than the effects of inflation. As of January 2012[update], only the 10,000- and 20,000-peso notes are still printed on cotton paper. All new notes have the same 70 mm (2.8 in) height, while their length varies in 7 mm (0.28 in) steps according to their face values: the shortest is the 1000-peso note and the longest is the 20,000-pesos.[6] The new notes are substantially more difficult to falsify because of new security measures.

The design and production of the whole new family of banknotes was assigned to the Australian company Note Printing Australia Ltd for the 1000-, 2000- and 5000-peso notes, and the Swedish company Crane AB for the 10,000- and 20,000-peso notes[5]

Colloquial Chilean Spanish has informal names for some banknotes and coins. These include luca for a thousand pesos, quina for five hundred pesos (quinientos is Spanish for "five hundred"), and gamba ("prawn") for one hundred pesos (can also apply to 100 000 pesos). These names are old: For example, gamba and luca applied to 100 and 1000 escudos before 1975. The term gamba is a reference to the color of one hundred pesos banknote issued between 1933 and 1959.

Value of the peso against the United States dollar 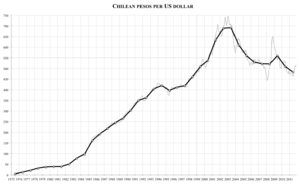 Current Chilean pesos per United States dollar (1975–2011). Note: The chart shows averages for the year. as well as monthly averages from 1984 onwards.

Between 1974 and 1979, the Chilean peso was allowed to float within a crawling band.[8] From June 1979 to 1982 the peso was pegged to the United States dollar at a fixed exchange rate.[9] In June 1982, during that year's economic crisis, the peso was devalued and different exchange rate regimes were used.[8][10] In August 1984 the peso returned to a system of crawling bands, which were periodically adjusted to reflect differences between external and internal inflation.[10]

Starting in September 1999, the Chilean peso was allowed to float freely against the United States dollar for the first time. Chile's Central Bank, however, reserved the right to intervene, which it did on two occasions to counter excessive depreciation: the first, in August and September 2001, coincided with Argentina's convertibility crisis and with the September 11 attacks in the United States. The second, in October 2002, was during Brazil's presidential election.[11]