Arch Colson Chipp Whitehead (born November 6, 1969) is an American novelist. He is the author of seven novels, including his 1999 debut work, The Intuitionist, and The Underground Railroad (2016), for which he won the 2016 National Book Award for Fiction and the 2017 Pulitzer Prize for Fiction; he won the Pulitzer Prize for Fiction again in 2020 for The Nickel Boys.[1][2] He has also published two books of non-fiction. In 2002, he received a MacArthur Fellowship ("Genius Grant").

Arch Colson Chipp Whitehead[3] was born in New York City on November 6, 1969, and grew up in Manhattan. He is one of four children to successful entrepreneur parents who owned an executive recruiting firm.[4][5] As a child in Manhattan, Whitehead went by his first name Arch. He later switched to Chipp, before switching to Colson.[6] He attended the elite prep Trinity School in Manhattan and graduated from Harvard University in 1991. In college, he became friends with poet Kevin Young.[7]

Early in his career, he lived in Fort Greene, Brooklyn.[8] Whitehead lives in Manhattan and also owns a home in Sag Harbor (The Hamptons), on Long Island. His wife, Julie Barer, is a literary agent and they have two children. [9]

After graduating from college, Whitehead wrote for The Village Voice.[10][11] While working at the Voice, he began drafting his first novels.

Whitehead has since produced nine book-length works—seven novels and two non-fiction works, including a meditation on life in Manhattan in the style of E.B. White's famous essay Here Is New York. The books are 1999's The Intuitionist, 2001's John Henry Days, 2003's The Colossus of New York, 2006's Apex Hides the Hurt, 2009's Sag Harbor, 2011's Zone One, a New York Times Bestseller; 2016's The Underground Railroad, which earned a National Book Award for Fiction, and 2019's The Nickel Boys.[12][13] Esquire magazine named The Intuitionist the best first novel of the year, and GQ called it one of the "novels of the millennium".[14] Novelist John Updike, reviewing The Intuitionist in The New Yorker, called Whitehead "ambitious," "scintillating," and "strikingly original," adding, "The young African-American writer to watch may well be a thirty-one-year-old Harvard graduate with the vivid name of Colson Whitehead."[14]

Whitehead's The Intuitionist was nominated as the Common Novel at Rochester Institute of Technology (RIT). The Common Novel nomination was part of a long-time tradition at the Institute that included authors like Maya Angelou, Andre Dubus III, William Joseph Kennedy, and Anthony Swofford.

Whitehead's non-fiction, essays and reviews have appeared in numerous publications, including The New York Times, The New Yorker, Granta, and Harper's.[15] 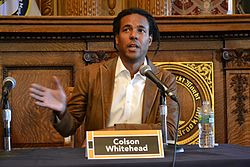 Whitehead at the 2011 Brooklyn Book Festival

His non-fiction account of the 2011 World Series of Poker The Noble Hustle: Poker, Beef Jerky & Death was published by Doubleday in 2014.

In the spring of 2015, he joined The New York Times Magazine to write a column on language.

His 2016 novel, The Underground Railroad, was a selection of Oprah's Book Club 2.0, and was also chosen by President Barack Obama as one of five books on his summer vacation reading list.[16][17] In January 2017 it was awarded the Carnegie Medal for Excellence in Fiction at the American Library Association Mid-Winter Conference in Atlanta, GA.[18] Colson was also honored with the 2017 Hurston/Wright Award for fiction presented by the Zora Neale Hurston/Richard Wright Foundation.[19] The Underground Railroad won the 2017 Pulitzer Prize for Fiction. Judges of the prize called the novel "a smart melding of realism and allegory that combines the violence of slavery and the drama of escape in a myth that speaks to contemporary America".[20]

Whitehead's seventh novel, The Nickel Boys, was published in July 2019. The novel was inspired by the real-life story of the Dozier School for Boys in Florida, where children convicted of minor offences suffered violent abuse.[21] In conjunction with the publication of The Nickel Boys, Whitehead was featured on the cover of TIME Magazine for the July 8, 2019 edition, alongside the strap-line "America's Storyteller".[4] The Nickel Boys won the 2020 Pulitzer Prize for Fiction.[22] Judges of the prize called the novel "a spare and devastating exploration of abuse at a reform school in Jim Crow-era Florida that is ultimately a powerful tale of human perseverance, dignity and redemption".[23] It is Whitehead's second win, making him the fourth writer in history to have won the prize twice.[24]

Whitehead's upcoming eighth novel, Harlem Shuffle, was conceived and begun before he wrote The Nickel Boys. It is a work of crime fiction set in Harlem during the 1960s.[4] Whitehead spent years writing the novel, and ultimately finished it in "bite-sized chunks" during the months he spent in quarantine during the COVID-19 pandemic in New York City.[25] Harlem Shuffle is scheduled to be published by Doubleday on September 14, 2021.[26]

For Apex Hides the Hurt

For The Underground Railroad

For The Nickel Boys