In Cuba, until 1 January 2021, there are two currencies, both called peso. One is the "Cuban peso" (in Spanish moneda nacional, ISO 4217 code: CUP) and the other is the Cuban convertible peso (ISO 4217 code: CUC, often called "dollar" in the spoken language). Both currencies are subdivided into 100 centavos. The CUC was pegged to the US dollar at par, while the CUP is currently 25 CUP = 1 CUC = US$1, for cash exchanges. Both currencies are not traded internationally, and they cannot be bought in advance outside Cuba. Importation/exportation of CUCs is prohibited.[4]

On 10 December 2020, it was announced that CUCs will start to be withdrawn from circulation from 1 January 2021, leaving the CUP as the only currency in circulation, pegged at US$1 = 24 CUP.[5] From that date, CUCs could only be exchanged in banks or CADECAs, or used in certain shops. [6] This move technically devalued the peso, compared to the "official" 1:1 rate used by Cuban state-owned businesses.[7]

Prior to unification of the currencies on 1 January 2021, Cuban state workers received their basic wages in CUPs, but some also received a portion of their salary in CUCs. Until 2014, most shops accepted payment only in one of CUP or CUC, depending on whether they were selling staple domestic goods or imported goods. From 2014, many state-owned shops began to accept either currency, in preparation for future unification of the two currencies.

CUC coins are distinguishable from CUP coins, as CUC coins have an octagonal shape within the outer round rim. The only exception is the most common CUP coin, the 1 CUP peso,[8] which also has this octagonal shape; while CUC currency shows monuments, and CUP bills have portraits.

Before 1857, Spanish and Spanish colonial reales circulated in Cuba. From 1857, banknotes were issued specifically for use on Cuba. These were denominated in pesos, with each peso worth 8 reales. From 1869, decimal notes were also issued denominated in centavos, with 100 centavos for each peso. In 1881, the peso was pegged to the US dollar at par. The currency continued to be issued only in paper form until 1915, when the first coins were issued.

In 1960, the peso lost value after the United States imposed an embargo against Cuba and the suspended the sugar quota; and Cuba changed the peg from the US dollar to the Soviet ruble (at that time US$1 was worth exactly 4 Soviet rubles). The suspension of the sugar quota was the main economic force driving Cuba to seek out the Soviet Union as a new economic partner.

When the Soviet Union dissolved in 1991, the peso lost much of its value with the exchange rate falling to 125 pesos to the US dollar. Recently, it has fluctuated between 23 and 25 pesos to the US dollar. In 1993, during the period of economic austerity known as the Special Period, the US dollar was made legal tender to encourage hard currency to enter the economy. The US dollar was the currency used to purchase some non-essential goods and services, such as cosmetics, and even staple kinds of food and drink.

In 1994, the convertible peso was introduced at a par with the US dollar, and circulated alongside the US dollar. Cuban businesses used an artificial "official rate" of 1 CUP = 1 CUC = US$1, whilst government-owned Cadecas (Casas de Cambio) exchanged cash at "unofficial" but government-set rates, which were closer to the exchange rates in the black-market.

On November 8, 2004, the Cuban government withdrew US dollars from circulation, citing the need to retaliate against further US sanctions.

From 2014, state-owned shops which had previously sold in CUC, began selling in either currency. The government also introduced other exchange rates used by specific types of businesses.

In 1897 and 1898, pesos were issued by revolutionary forces promoting independence.[10] In 1915, cupro-nickel 1, 2 and 5 centavos, silver 10, 20 and 40 centavos and 1 peso, and gold 1, 2, 4, 5, 10 and 20 peso coins were introduced. These coins were designed by Charles E. Barber, who also designed the Barber dimes, quarters, half-dollars for the US. The coins were minted at the US mint at Philadelphia. The gold coins and 2 centavos were not produced after 1916, with the large star design 1 peso ceasing production in 1934. A new silver peso showing a woman, representing the Cuban Republic, beneath a star (the "ABC peso") was issued from 1934 to 1939.[11] Finally, a centennial of Jose Marti commemorative peso (also minted in 50, 25, and 1 centavos denominations) was produced in 1953.

Brass 1 and 5 centavos were issued in 1943, and with copper nickel composition sporadically from 1915 to 1958. Beginning in 1915, 2, 5, 10, 20 and 40 centavos coins were occasionally minted. The last 10, 20, and 40 centavo coins were produced in 1952; these were commemorative issues celebrating the fiftieth year of the republic. As mentioned above, in 1953, silver 25 and 50 centavos commemorative coins were also issued. These were the last silver coins issued for circulation. The last US produced coin was the 1961 five centavo piece.[12]

In 1962, cupro-nickel 20 and 40 centavos were introduced, followed, in 1963, by aluminium 1 and 5 centavos. In 1969, aluminium 20 centavos were introduced, followed by aluminium 2 centavos and brass 1 peso in 1983. Cupro-nickel 3 peso coins were introduced in 1990, with brass-plated-steel 1 peso and nickel-clad-steel 3 peso coins following in 1992. 40 centavo coins were withdrawn from circulation around July 2004 and are no longer accepted as payment. In 2017, the Banco Central de Cuba introduced bi-metallic 5 pesos coin (the difference is the denomination and composition (with a cupronickel ring and a brass center plug). Coins currently in common circulation are 5 and 20 centavos and 1, 3 and 5 pesos; 1 and 2 centavo coins are rarely seen (due to their tiny value) but still valid. 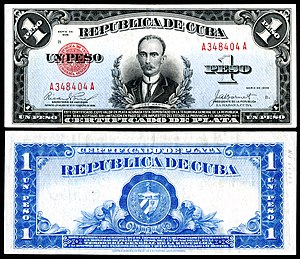 In 1997, the functions of Banco Nacional as a central bank, including issuing notes and coins, were transferred to a newly created entity.

Employees of the Cuban state and of state enterprises are paid their basic salary in CUP, with some paid a performance-dependent bonus in CUC. Staple goods and services not oriented towards foreign visitors are usually paid for in CUP. 'Luxury' goods and services, including most imported goods and anything intended for consumption by foreign visitors, are generally paid for in CUC. Since around 2014, most state shops which used to accept only CUC have accepted either currency, with exchange charts posted by the tills. State shops and markets selling basic foods continue to accept only CUP.[citation needed]

There might occasionally be places which use this system to confuse tourists, and charge them in CUC when they should be charging them in CUP. As an example, this will be like paying US$5 for something that is only worth US$0.20.[18]

From 2011 until 31 December 2020, the official rate is 1:24 to exchange CUC cash for CUP and 25:1 the reverse.[19] Exchange rate websites often show misleading rates for the CUP.[citation needed]

On 1 January 2021, the Cuban government began a long-awaited process of currency unification that will see all CUCs converted into CUPs (at a rate of one to 24) by the end of June 2021.[20]