Satellite photograph of industrial deforestation in the Tierras Bajas project in eastern Bolivia, using skyline logging and replacement of forests by agriculture 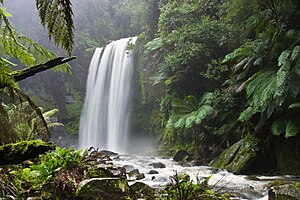 Much attention has been given to preserving the natural characteristics of Hopetoun Falls, Australia, while allowing access for visitors

Nature conservation is the moral philosophy and conservation movement focused on protecting species from extinction, maintaining and restoring habitats, enhancing ecosystem services, and protecting biological diversity. A range of values underlie conservation, which can be guided by biocentrism, anthropocentrism, ecocentrism, and sentientism.[1] There has recently been a movement towards evidence-based conservation which calls for greater use of scientific evidence to improve the effectiveness of conservation efforts.

The principal value underlying many expressions of the conservation ethic is that the natural world has intrinsic and intangible worth along with utilitarian value – a view carried forward by parts of the scientific conservation movement and some of the older Romantic schools of the ecology movement. Philosophers have attached intrinsic value to different aspects of nature, whether this is individual organisms (biocentrism) or ecological wholes such as species or ecosystems (ecoholism).[2]

More utilitarian schools of conservation have an anthropocentric outlook and seek a proper valuation of local and global impacts of human activity upon nature in their effect upon human wellbeing, now and to posterity. How such values are assessed and exchanged among people determines the social, political and personal restraints and imperatives by which conservation is practiced. This is a view common in the modern environmental movement. There is increasing interest in extending the responsibility for human wellbeing to include the welfare of sentient animals. Branches of conservation ethics focusing on sentient individuals include ecofeminism[3] and compassionate conservation.[4]

In the United States of America, the year 1864 saw the publication of two books which laid the foundation for Romantic and Utilitarian conservation traditions in America. The posthumous publication of Henry David Thoreau's Walden established the grandeur of unspoiled nature as a citadel to nourish the spirit of man. A very different book from George Perkins Marsh, Man and Nature, later subtitled "The Earth as Modified by Human Action", catalogued his observations of man exhausting and altering the land from which his sustenance derives.

The consumer conservation ethic is sometimes expressed by the four R's: " Rethink, Reduce, Recycle, Repair". This social ethic primarily relates to local purchasing, moral purchasing, the sustained, and efficient use of renewable resources, the moderation of destructive use of finite resources, and the prevention of harm to common resources such as air and water quality, the natural functions of a living earth, and cultural values in a built environment.

The person credited with formulating the conservation ethic in the United States is former president, Theodore Roosevelt. [5]

The conservation of natural resources is the fundamental problem. Unless we solve that problem, it will avail us little to solve all others.

In common usage, the term refers to the activity of systematically protecting natural resources such as forests, including biological diversity. Carl F. Jordan defines the term as:[7]

biological conservation as being a philosophy of managing the environment in a manner that does not despoil, exhaust or extinguish.

While this usage is not new, the idea of biological conservation has been applied to the principles of ecology, biogeography, anthropology, economy, and sociology to maintain biodiversity.

The term "conservation" itself may cover the concepts such as cultural diversity, genetic diversity, and the concept of movements environmental conservation, seedbank (preservation of seeds). These are often summarized as the priority to respect diversity.

Much recent movement in conservation can be considered a resistance to commercialism and globalization. Slow Food is a consequence of rejecting these as moral priorities, and embracing a slower and more locally focused lifestyle.

Distinct trends exist regarding conservation development. While many countries' efforts to preserve species and their habitats have been government-led, those in the North Western Europe tended to arise out of the middle-class and aristocratic interest in natural history, expressed at the level of the individual and the national, regional or local learned society. Thus countries like Britain, the Netherlands, Germany, etc. had what would be called non-governmental organizations – in the shape of the Royal Society for the Protection of Birds, National Trust and County Naturalists' Trusts (dating back to 1889, 1895, and 1912 respectively) Natuurmonumenten, Provincial Conservation Trusts for each Dutch province, Vogelbescherming, etc. – a long time before there were national parks and national nature reserves. This in part reflects the absence of wilderness areas in heavily cultivated Europe, as well as a longstanding interest in laissez-faire government in some countries, like the UK, leaving it as no coincidence that John Muir, the Scottish-born founder of the National Park movement (and hence of government-sponsored conservation) did his sterling work in the US, where he was the motor force behind the establishment of such national parks as Yosemite and Yellowstone. Nowadays, officially more than 10 percent of the world is legally protected in some way or the other, and in practice, private fundraising is insufficient to pay for the effective management of so much land with protective status.

Protected areas in developing countries, where probably as many as 70–80 percent of the species of the world live, still enjoy very little effective management and protection. Some countries, such as Mexico, have non-profit civil organizations and landowners dedicated to protecting vast private property, such is the case of Hacienda Chichen's Maya Jungle Reserve and Bird Refuge in Chichen Itza, Yucatán.[8] The Adopt A Ranger Foundation has calculated that worldwide about 140,000 rangers are needed for the protected areas in developing and transition countries. There are no data on how many rangers are employed at the moment, but probably less than half the protected areas in developing and transition countries have any rangers at all and those that have them are at least 50% short This means that there would be a worldwide ranger deficit of 105,000 rangers in the developing and transition countries.

Adopt A Ranger fears that the ranger deficit is the greatest single limiting factor in effectively conserving nature in 75% of the world.[9] Currently, no conservation organization or western country or international organization addresses this problem. Adopt A Ranger has been incorporated to draw worldwide public attention to the most urgent problem that conservation is facing in developing and transition countries: protected areas without field staff. Very specifically, it will contribute to solving the problem by fundraising to finance rangers in the field. It will also help governments in developing and transition countries to assess realistic staffing needs and staffing strategies.

Others, including Survival International, have advocated instead for cooperation with local tribal peoples, who are natural allies of the conservation movement and can provide cost-effective protection.[10]

The terms conservation and preservation are frequently conflated outside the academic, scientific, and professional kinds of literature. The US National Park Service offers the following explanation of the important ways in which these two terms represent very different conceptions of environmental protection ethics:

Evidence-based conservation is the application of evidence in conservation management actions and policy making. It is defined as systematically assessing scientific information from published, peer-reviewed publications and texts, practitioners' experiences, independent expert assessment, and local and indigenous knowledge on a specific conservation topic. This includes assessing the current effectiveness of different management interventions, threats and emerging problems, and economic factors.[12]