Sir Ralph Norman Angell (26 December 1872 – 7 October 1967) was an English Nobel Peace Prize winner. He was a lecturer, journalist, author and Member of Parliament[1] for the Labour Party.

Angell was one of the principal founders of the Union of Democratic Control. He served on the Council of the Royal Institute of International Affairs, was an executive for the World Committee against War and Fascism, a member of the executive committee of the League of Nations Union, and the president of the Abyssinia Association. He was made a Knight Bachelor in 1931 and awarded the Nobel Peace Prize in 1933.[2][3] 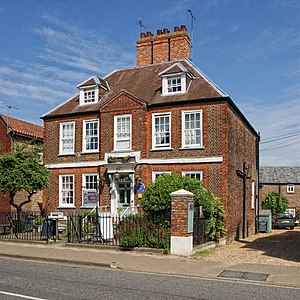 Angell was one of six children, born to Thomas Angell Lane and Mary (née Brittain) Lane in Holbeach, Lincolnshire, England.[3] He was born Ralph Norman Angell Lane, but later adopted Angell as his sole surname.[4] He attended several schools in England, the Lycée Alexandre Ribot at Saint-Omer in France,[3] and the University of Geneva, while editing an English-language newspaper published in Geneva.[3]

In Geneva, Angell felt that Europe was "hopelessly entangled in insoluble problems". Then, still only 17, he emigrated to the West Coast of the United States,[3] where he for several years worked as a vine planter, an irrigation-ditch digger, a cowboy, a California homesteader (after filing for American citizenship), a mail-carrier, a prospector,[5] and then, closer to his natural skills, as a reporter for the St. Louis Globe-Democrat and later the San Francisco Chronicle.[3]

Due to family matters he returned to England briefly in 1898, then moved to Paris to work as a sub-editor on the English-language Daily Messenger,[5] and then as a staff contributor to the newspaper Éclair. He also through this period acted as French correspondent for some American newspapers, to which he sent dispatches on the progress of the Dreyfus case.[3] During 1905–12, he became the Paris editor for the Daily Mail.

He returned to England and, in 1914, he was one of the founders of the Union of Democratic Control. He joined the Labour Party in 1920 and was parliamentary candidate for Rushcliffe in the general election of 1922 and for Rossendale in 1923. He was MP for Bradford North from 1929 to 1931; after the formation of the National Government, he announced his decision not to seek re-election on 24 September 1931.[6] In 1931 he was knighted for his public and political services, and in 1933 he was presented with the Nobel Peace Prize.[3] He stood unsuccessfully for the London University seat in 1935.

From the mid-1930s, Angell actively campaigned for collective international opposition to the aggressive policies of Germany, Italy, and Japan. He went to the United States in 1940 to lecture in favour of American support for Britain in World War II, and remained there until after the publication of his autobiography in 1951. He later returned to Britain and died at the age of 94 in Croydon, Surrey.[5]

He married Beatrice Cuvellier but they separated and he lived his last 55 years alone. He purchased Northey Island, Essex, which is attached to the mainland only at low tide, and lived in the sole dwelling on the island.

His Nobel Peace Prize medal and accompanying scroll are held by the Imperial War Museum.[7]

Angell is most widely remembered for his 1909 pamphlet, Europe's Optical Illusion, which was published the following year (and many years thereafter) as the book, The Great Illusion. (The anti-war film La Grande Illusion took its title from his pamphlet.) The thesis of the book was that the integration of the economies of European countries had grown to such a degree that war between them would be entirely futile, making militarism obsolete. This quotation from the "Synopsis" to the popular 1913 edition summarizes his basic argument.

He establishes this apparent paradox, in so far as the economic problem is concerned, by showing that wealth in the economically civilized world is founded upon credit and commercial contract (these being the outgrowth of an economic interdependence due to the increasing division of labour and greatly developed communication). If credit and commercial contract are tampered with in an attempt at confiscation, the credit-dependent wealth is undermined, and its collapse involves that of the conqueror; so that if conquest is not to be self-injurious it must respect the enemy’s property, in which case it becomes economically futile. Thus the wealth of conquered territory remains in the hands of the population of such territory. When Germany annexed Alsace, no individual German secured a single mark’s worth of Alsatian property as the spoils of war. Conquest in the modern world is a process of multiplying by x, and then obtaining the original figure by dividing by x. For a modern nation to add to its territory no more adds to the wealth of the people of such nation than it would add to the wealth of Londoners if the City of London were to annex the county of Hertford.[8]

Angell was also the designer of The Money Game, a visual method of teaching schoolchildren the fundamentals of finance and banking. First published in 1928 by J. M. Dent & Sons, The Money Game, How to Play It: A New Instrument of Economic Education was both a book and a game. The bulk of the book was an essay on money and a discussion of economic theory, it also contained a summary of the game's story and an explanation of the rules.[9]

Angell's book The Press And The Organisation of Society is cited as a source in F. R. Leavis' pamphlet Mass Civilisation and Minority Culture (1930).[10] Vera Brittain quoted Angell's statement on "the moral obligation to be intelligent" several times in her work.[11]