The company is listed on the New York Stock Exchange (NYSE) and is currently a component of the S&P 500.[4]

Nielsen was founded in 1923 by Arthur C. Nielsen, Sr., who invented an approach to measuring competitive sales results that made the concept of "market share" a practical management tool. The company was originally incorporated in the Netherlands and later was purchased on May 24, 2006, by a consortium of private equity firms.[4]

In January 2011, Nielsen consummated an initial public offering of common stock and, subsequently, started trading on the New York Stock Exchange under the symbol “NLSN”.[4] On August 31, 2015, Nielsen N.V., a Dutch public company listed on the New York Stock Exchange, merged with Nielsen Holdings plc, by way of a cross-border merger under the European Cross-Border Merger Directive, with Nielsen Holdings plc being the surviving company.[4] The merger effectively changed the place of incorporation of Nielsen's publicly traded parent holding company from the Netherlands to England and Wales, with no changes made to the business being conducted by Nielsen prior to the merger.[4] 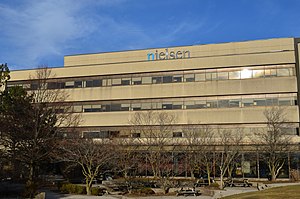 Nielsen is a global, independent measurement and data company for fast-moving consumer goods, consumer behavior, and media. With a presence in more than 100 countries and services covering more than 90% of the globe's GDP and population, Nielsen provides clients with data about what consumers watch (programming, advertising) and what they buy (categories, brands, products) on a global and local basis and how those choices intersect.[5]

The company's operations span developing and emerging markets worldwide, in more than 100 countries. According to SEC records, on February 26, 2015, Nielsen N.V., announced that its board of directors unanimously approved a proposal that resulted in a change in the company's legal domicile, from the Netherlands to the United Kingdom.[6] Upon approval, the company became incorporated under English law and was registered as a public limited company to be named Nielsen Holdings PLC.[7]

James Attwood Jr. is Nielsen's non-executive Chairman,[1] and David Kenny is Nielsen's Chief Executive Officer. James Attwood succeeded Dave Calhoun as Executive Chairman in January 2016. Prior to joining Nielsen as CEO in 2006, Dave Calhoun served as Vice Chairman of The General Electric Company and President and Chief Executive Officer of GE Infrastructure, the largest of six GE business units. He served as Nielsen CEO from to 2006 to 2014, when he was succeeded by Mitch Barns.[8] Barns joined Nielsen in 1997 and has held various roles in Europe, Asia, and North America leading major parts of the business.[9]

While the Nielsen brand is most often associated with television ratings, those TV ratings services comprise approximately one-quarter of the company's business and revenues. After substantial work to simplify the company over the last several years, Nielsen today aligns its business into two reporting segments: Buy (consumer purchasing measurement and analytics) and Watch (media audience measurement and analytics).[10]

Nielsen's Buy segment (approx. 45% of global revenues) primarily helps packaged goods companies and retailers (and Wall Street analysts) understand what consumers are buying in terms of categories, brands and products. The company's aim is to measure all consumer purchases as buying behavior continues to fragment across channels and segments.[5] For example, it is Nielsen's data that measures how much Diet Coke vs. Diet Pepsi is sold in stores, or how much Crest versus Colgate toothpaste is sold. Nielsen accomplishes this by purchasing and analyzing huge amounts of retail data that measures what is being sold in the store, and then combines it with household panel data that captures everything that is brought into the home. These measures of sales performance also fuel a range of forward-looking analytics to help clients improve the precision and efficiency of their advertising spending, maximize the impact of their promotion budgets and optimize their product assortment. They also can provide insights into how changes in product offerings, pricing or marketing would change sales. Major clients include The Coca-Cola Company, Nestlé S.A., The Procter & Gamble Company, Unilever Group, and Walmart. While the United States is the company's largest market, Nielsen is a global company. In the Buy business, it covers 106 countries representing more than 90% of the world's population.[5]

Nielsen's Watch segment (approx. 55% of global revenues) primarily measures what consumers are watching (and listening to) across most devices: TV, radio, computers, mobile, over-the-top, etc. The company measures consumption of programming and advertising across all distribution points. Nielsen's ratings are used by advertisers and networks to shape the buying and selling of advertising. Major clients include CBS, NBC Universal, News Corporation, and The Walt Disney Company.[11] Nielsen's Watch business measures media in 47 countries that together represent approximately 80% of global advertising spending. Nielsen's digital audience measurement capability is a rapidly growing part of this footprint.[5]

Arthur C. Nielsen and the invention of "Market Share"

Arthur C. Nielsen founded the AC Nielsen Company in August 1923[12][13] with the idea of selling engineering performance surveys. It was the first company to offer market research.[14] The company expanded its business in 1932 by creating a retail index that tracked the flow of food and drug purchases. This was the first retail measurement of its kind and for the first time allowed a company to determine its "share" of the market—the origination of the concept of "market share"[14] Arthur C. Nielsen is credited with coining this business term.

In 1936, Arthur C. Nielsen acquired the Audimeter, which measured which radio stations a radio had been tuned to during the day. After tinkering with the device for a few years, the company created a national radio rating service in 1942.[15] The company collected information on which stations radios were tuned to in one thousand homes. Then, this survey data was sold to manufacturers who were interested in the popularity of programs and demographic information about listeners for advertising purposes. This was the birth of audience measurement that would become the most well-known part of Nielsen's business when applied to television.[15] Today, these are commonly referred to as "Nielsen ratings".

The company began measuring television audiences in 1950, at a time when the medium was just getting off the ground. Just as with radio, a sampling of homes across the U.S. was used to develop ratings. This information was collected on a device that was attached to a television that recorded what was being watched. In 1953, the company began sending out diaries to a smaller sample of homes ("Nielsen families") within the survey to have them record what they had watched.[14] This data was put together with information from the devices. This combination of data allowed the company to statistically estimate the number of Americans watching TV and the demographic breakdown of viewers.[14] This became an important tool for advertisers and networks.

In the 1980s, the company launched a new measurement device known as the "people meter". The device resembles a remote control with buttons for each individual family member and extras for guests. Viewers push a button to signify when they are in the room and push it again when they leave, even if the TV is still on. This form of measurement was intended to provide a more accurate picture of who was watching and when.[16]

In July 2008,[17] Nielsen released the first in a series of quarterly reports, detailing video and TV usage across the ‘three screens’ – Television, Internet and Mobile devices. The A2/M2 Three Screen Report also includes trends in timeshifted viewing behavior and its relationship to online video viewing, a demographic breakdown of mobile video viewers and DVR penetration.

On September 30, 2016,[18] Nielsen made its Digital Content Ratings available in full syndication for clients.

On September 9, 2016,[19] Nielsen announced that it will retire its paper TV diaries by mid-2017 and provide all electronic measurement in its local television ratings.

Nielsen was acquired by the Dun & Bradstreet Company in 1984.[20] In 1996, D&B divided the company into two separate companies: Nielsen Media Research, which was responsible for TV ratings, and AC Nielsen, which was responsible for consumer shopping trends and box-office data.[21] In 1999, Nielsen Media Research was acquired by the Dutch publishing company VNU (Verenigde Nederlandse Uitgeverijen).[22] VNU later acquired AC Nielsen and recombined the two businesses in 2001. In between, VNU sold off its newspaper properties to Wegener and its consumer magazines to Sanoma. The company's publishing arm also owned several publications including The Hollywood Reporter and Billboard magazine. VNU combined the Nielsen properties with other research and data collection units including BASES, Claritas, HCI and Spectra. VNU also acquired companies that added to its measurement capabilities.

Nielsen was a private company from 2006 through 2011. On January 25, 2011 the company listed itself on the New York Stock Exchange and issued an initial public offering (IPO) that raised $1.8 billion in the largest private equity-backed U.S. IPO since 2006.[23]

VNU acquired a majority stake in Buzzmetrics, a company which measures consumer-generated media online. Under the new ownership, Nielsen bought the remaining shares of the company in 2007.[25] In the same year, Nielsen acquired Telephia, which measures mobile media,[26] and Bilesim Medya, a Turkish advertising intelligence firm.[27] VNU was acquired by a group of six private equity firms: the American Kohlberg Kravis Roberts, Thomas H. Lee Partners, Blackstone Group, Carlyle Group and Hellman & Friedman, and Dutch equity firm AlpInvest Partners[28] for £5bn.[29] In the same year, the group hired David L. Calhoun, formerly of General Electric, as CEO.[30] He renamed VNU as The Nielsen Company in 2007. VNU sold its business publications division for €320m (£210m) to venture capital group 3i, which then sold the UK division (VNU Business Publications Ltd) to Incisive Media.[29]

In June, Nielsen acquired Telephia, a provider of syndicated consumer research to the telecom and mobile media markets.[31]

Nielsen acquired IAG Research which measures viewer engagement with TV commercials.[32] The same year, Nielsen made a strategic investment in NeuroFocus, a California firm applying neuroscience brainwave techniques for consumer research. The firm was later fully acquired by Nielsen in 2011[33] In 2009 and 2010, Nielsen sold its business magazines; its well-known entertainment properties went to the new company e5 Global Media.

In February, Nielsen launched The Demand Institute in collaboration with The Conference Board. The Demand Institute is a non-profit, non-advocacy organization. In July, Nielsen acquired the advertising tech company Vizu. The acquisition was made so that Nielsen can better analyze the effectiveness of online advertisement.[37] In November, Nielsen acquired SocialGuide, a provider of social TV measurement, analytics and audience engagement solutions.[38] On December 17, 2012, Nielsen disclosed that it would acquire Arbitron, a company primarily involved in radio audience measurement, for $1.3 billion. The successful acquisition was completed on September 30, 2013.[39]

On January 22, 2015, Nielsen acquires Brandbank, specialized in the process of digitally collecting, managing and distributing FMCG product and brand image content for retail syndication across in-store, print promotional and e-commerce platforms.[43] On March 4, 2015, Nielsen announced the acquisition of Exelate, a provider of data and technology to facilitate the buying and selling of advertising across programmatic platforms.[44] On May 27, 2015, Nielsen acquired Innerscope Research, which specialized in consumer neuroscience using biometrics, eye tracking and facial coding. Nielsen renamed its combined offering as Nielsen Consumer Neuroscience, and named Carl Marci as Chief Neuroscientist.[45]

On January 5, 2017,[50] The Carlyle Group acquired Claritas from Nielsen. On January 23, 2017,[51] the Stagwell Group announced that it acquired Nielsen's Harris brand and the Harris Poll through its Stagwell Media LLC. On February 1, 2017,[52] Nielsen completed its acquisition of Gracenote. On February 23, 2017, Nielsen acquired Rhiza, Inc., a Pittsburgh-based media and consumer analytics software firm.

FIFA has signed up with Nielsen to provide official market research for the 2017 FIFA Confederations Cup and the 2018 FIFA World Cup.[53]